RESEARCH ON DEVELOPMENT OF ENVIRONMENTAL COUNTERMEASURE SUCH AS MALODOR TREATMENT

We are now conducting research on developing microbial products that can help eliminate the odor arising from hog farms. The title of our research is “Developing microbial material that can degrade short-chain fatty acids (volatile fatty acids) in swine excrement and eliminating odors arising from hog farms, 2011 project.” This study is being conducted in collaboration with the Industry-Academia-Government (Supported by Fukuoka Industry Science Technology Foundation).

In collaborative research with Public Research Organizations, we developed effective microorganisms that inhibit the growth of fungi, which causes pathogenic lesions in plants.

DEVELOP FUNCTIONAL FEED MATERIAL WITH MICROORGANISMS AS THE PRIMARY CONSTITUENTS

We studied lactic acid bacteria that were isolated from a marine environment and showed immunostimulatory activity, and determined the effect of these bacteria on farmed fish.

In collaboration with Provincial Government of Fukuoka, we are developing a microbial control agent against mosquito larvae that cause infections such as Malaria and Dengue Fever which has become a problem especially in tropical countries like Indonesia. 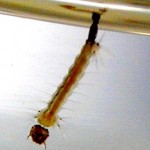